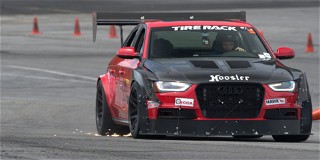 The Bristol Summer Nationals holiday celebration concluded this past weekend with two days of Tire Rack SCCA Championship Tour action. Most competitors had spent the previous two days competing in the 2019 Tire Rack SCCA Bristol Match Tour and stuck around for even more competition and fun with for the Champ Tour.

In Street Modified, Jeremiah Thomas and Geoffrey Wolpert brought their SMF-prepared Mini Cooper S into the class for the weekend to shake things up. After three runs on Saturday, Thomas led the class of five drivers by 0.133 second over Jay Bullington. Day two brought cone trouble for Thomas though as he had to stand on a dirty run for the day’s best. Meanwhile, Bullington came out swinging and took the class win by 1.111 second over Wolpert who claimed the second and final trophy spot.

Street Touring Sport brought some of the closest competition of the event with the margin of victory coming down to just 0.044 second. Brian Levesque set the early pace and held onto the lead through day one competition. When they returned on Sunday afternoon, Rich DiMarco came out with the fastest times of the day and proceeded to knock tenths off his time with each run. That constant improvement was what he needed to overcome his 0.491-deficit after day one to take the win over Levesque. Trevor Blackwell claimed the third and final trophy position.

Sometimes course design can have an impact on results, especially in classes with already tight competition. In E Street, Cory Barr earned a 0.575-second lead after day one competition in his MazdaSpeed Miata. Normally, the shorter gearing of the MSM would put it at a disadvantage, but on the big day one course, it was right at home while the other Miatas and Toyota MR2 Spyders were fighting rev limiters in second gear. On day two, a new course restacked the deck and Eric Peterson emerged on a mission, setting the pace early and proceeding to improve on it. Barr was also improving and carried the advantage from day one. On day two, Peterson claimed the fastest time by 0.653 over Barr, earning the class win by a mere 0.078 second. Kevin Lindley and Justin Crump claimed the third and fourth place trophies respectively.

While the cars of Street Touring Ultra are various, the competition was close all weekend. Adam Norton set the pace on day one in his Fiat 124 Spider, just 0.133 second ahead of Paul Kolatorowicz in the Ford Focus RS. Omar Elgazzar, in a BMW 335, was nipping at their heels outside of the trophies, just 0.048 second behind Kolatorowicz. On day two, the competition didn’t ease up with Norton only stretching his lead out to 0.169 second to take the class win over Kolatorowicz.

While all of these classes had tight competition, CAM Contemporary set the standard for number of competitors in on the battle for the lead. Jon Nwanagu led through day one after a sudden downpour nullified third runs for the class. Heading into day two competition, the top six drivers were separated by just over a second. The fastest day two time belonged to Eric Peachey, but with about a second separating the fastest six times again, he was only able to climb to sixth in the final results. On the merits of having the third fastest time Saturday and fourth fastest on Sunday, Jeff Dobbins took the class win by 0.068 second over Steve Waters. Justin Peachey claimed third with cones on his fastest runs from each day. Cleaning up either could have taken him to first place. Jon Nwanagu claimed the fourth and final trophy position.